Stampin’ Up Convention 2013: I made the boards! 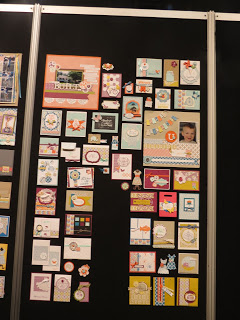 One of the highlights of every Stampin’ Up event is the many display boards that are up for photo-taking. What was even more exciting for me this year was that I had submitted 10 projects for the Artisan Award (sadly, I didn’t make it to the finalists), which means I was on the look-out for some of my submissions on the display boards.

It’s like a little scavenger hunt! Not all 10 of my projects made it to the boards, but several did! (I’ll have to show you the others in another post).

In this photo you can see my scrapbook page in the upper left-hand corner. I have to say this was one of my favorite entries this year. It may not be the most ground-breaking as far as design is concerned, but it really meant a lot to me personally.

As many of you may know I lost my Mom last year (you can read more about that here) and we had to sell her house. So I made this layout in tribute to the house where I grew up. It was the only home I ever knew as a kid — I was born there and lived there until I ventured out on my own in 1999. Here is a close-up picture of the page: 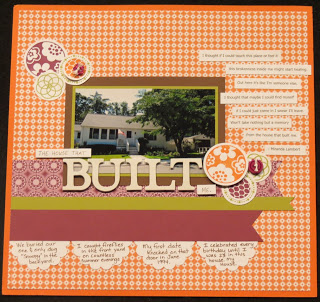 That’s a picture of my house as a kid. That tree in the photo is a Mimosa Tree. They are super pretty when they are blooming, but make an awful mess as the flowers die off… we used to fight over who had to park their car under it! But I digress.

I was inspired to create this page from the Miranda Lambert song by the same name (The House That Built Me). The journaling in the top right is actually lyrics from her song. The bottom four scallop circles have some of the memories that I have from the house.

Journaling: “We buried our one & only dog “Snoopy” in the backyard. I caught fireflies in the front yard on countless summer evenings. My first date knocked on that door in 1994. I celebrated every birthday until I was 23 in this house. My house.”

I had a few other items make the Convention 2013 display boards as well. Here is a picture of one of my 3-D items (we had to submit three scrapbook pages, five cards and two 3-D items for the Artisan Award). Here is my canvas pocket and matching bookmark: 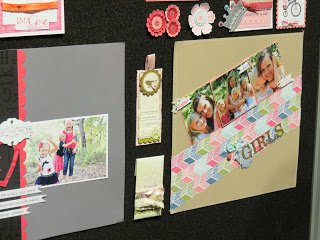 Do you see it? The bookmark is on top in between the two very cute scrapbook pages. The little envelope to hold it is underneath the bookmark.

I have a hard time with 3-D items so this was the last thing I made. I just couldn’t figure out what to do. My first 3-D item came to me first actually and was the very first thing I made. (I’ll show you those in a separate post — they didn’t make the display boards, but I saved pictures of them!).

I also had a couple of cards make the display boards including my favorite… this wedding card: 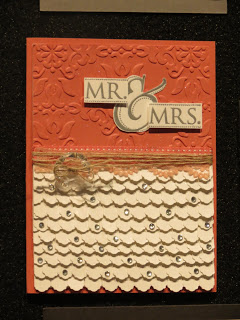 I had originally planned to make a wedding dress out of the little bitty scallops, but when I tried to put my vision down on paper, it ended up looking more like a mermaid than a wedding dress. I could have re-done it (or gone with the mermaid idea), but instead decided to go with this more elegant version.

One last card to share with you for today. I think that is all I had on the boards, but I’ll have to go through my pictures again just to make sure. Below is a picture of a birthday card I made using the now-retired Patio Party Designer Series Paper … that was one of my favorite last year, but I have oh-so-many new favorites now 🙂 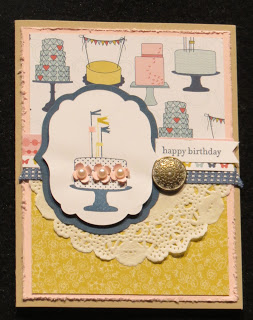 Ok, that’s enough about me today… I hope you enjoyed my project. I think I will try again next year for the Artisan Award… maybe I’ll just get a head start and beginning in December! Ten projects is a lot!

Which of these projects do you like best? I always enjoy learning what my friends and customers like…

Come back soon for some more details on my trip to Salt Lake City for the Stampin’ Up convention. 🙂