Yet Another Sneak Peek! 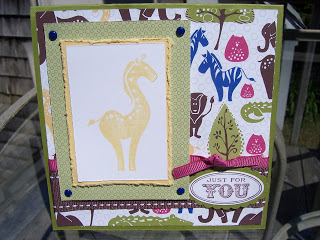 I am having so much fun playing with all my new toys! This really wasn’t a set I would have been drawn to normally, but since there were only six sneak peek stamp sets in the demo release and I earned four for free and could get the other two at an additional 20 percent off, I ordered all of them! This set is called Animal Stories and it’s kind of growing on me! The paper that coordinates with it (Tall Tales DSP) is really cool, too – some real fun and funky color combos.

I’m working on plans for a catalog release party called “Get the Scoop” to celebrate the new catalog, which will feature an ice cream sundae bar (YUM!) and make and takes (does it get any better?)… so stay tuned….