Things don’t always turn out the way you intend… 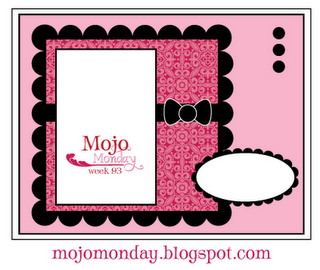 I was trying to prepare for my stamp club yesterday and I decided to try using a sketch from the Mojo Monday blog (a great place to start when you are feeling stumped, by the way).
So this sketch inspired me and I decided to create a card using it. Now I have a rectangular scallop die for my Big Shot and thought I would use that for the focal point of my card.
Well, when I pulled it out, I realized it was too big. So, I thought, “well I have a scallop circle die that I could use instead.”
Guess what? When I pulled it out and tried that one, it was too big as well. I had originally planned to use Basic Black, Baja Breeze and the new Cherry Cobbler (a color combo I got from new Stampin’ Up color coach).
So I had planned to use the medallion image in the new Artistic Etchings stamp set as a background stamp. So this is where I started…. 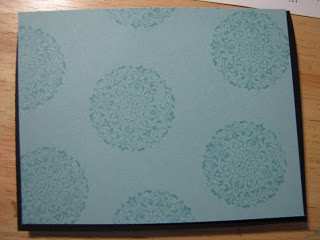 So I cut out a scallop circle using my Big Shot because I thought the round shape would work well with the Medallion stamp image. 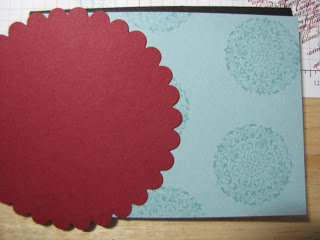 When I got the scallop die-cut next to the card, it was too big and I decided to switch gears. I pulled out my new newsprint Designer Series paper. I decided I wanted a vintage feel for the card, but now the Baja Breeze color wasn’t giving me the right feel so I pulled the Baja out and decided to use just the Newsprint, black and Cherry Cobbler.
After fiddling for a little while, I came up with this: 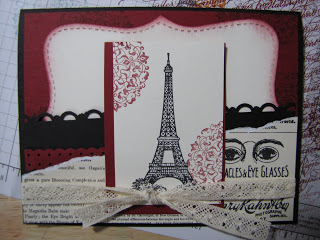 But it wasn’t working for me. There was too much open space on the top note die in the background and those two eyes were bugging me behind the Eiffel Tower image. I pulled out my Big Shot again and embossed the top note die, added some “hardware” and a sentiment.
This is the final card: 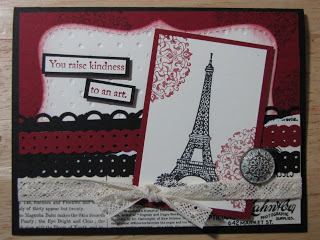 So… a rather crazy, round-about way to come up with a final version, but I think I like how it came out.
Having said that, though, it’s not going to make the cut for club. So now I need to go back to work and come up with another design that WILL work for my stamp club…
Here I go again….. Happy Sunday!
Share This