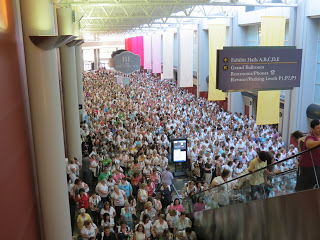 Hello There! I so wanted to blog while I was at convention this year — I even brought along my computer so I could. But you know what? We were so stinkin’ busy for those three days I was completely wiped out by the time we got back to the hotel room. I know, I know that really shouldn’t have been an excuse! 🙂 But that’s my story and I’m sticking to it.

However, I am going to make it up to you by doing a series of posts about my trip to the Stampin’ Up Convention in Salt Lake City.

Here is a photo of what the hall looked like after the end of our first general session. Were you looking for your Stampin’ Up demonstrator last week? I think I found her! There were 5,800 of us attending this year. It is our 25th anniversary so there were more people attending than I think ever before. We even had demonstrators from other parts of the world — like Australia, New Zealand and France. Pretty cool.

Anna and I arrived early afternoon on Thursday, which was the first day of convention. Our opening general session started at 5:30 so we had no room for delays or hold-ups and that had me a little worried, but everything turned out fine. We arrived in plenty of time.

The first session featured a visit from Ronald McDonald. As many of you may know Stampin’ Up is a national sponsor of the Ronald McDonald House Charities and Shelli announced at convention that we are now Global sponsors of the charity. Each year a portion of the sales of one of our stamp sets benefits the Ronald McDonald Charities — this year it is the Tag It stamp set. Stampin’ Up had donated millions of dollars over the years because of this annual fundraising drive. Here’s a picture of Ronald with Shelli on stage:

He shared some really sweet stories of the kids in the Ronald McDonald houses and how their lives have been touched by the wishing wall that was established by Stampin’ Up in Salt Lake City. Family and friends get to write messages and wishes on the wall for the patients. It was really sweet. Ronald even got teary eyed and cried. It’s very unusual for Shelli to be the composed one on stage (it’s sort of a joke that she needs to carry Kleenex on stage every time she comes out), but she was actually the one comforting Ronald. It was sweet. 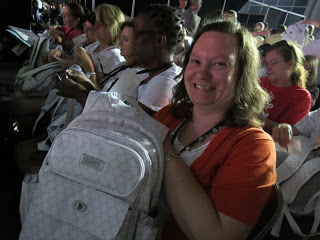 We also got our convention bag during the first general session. That’s always a big highlight of any Stampin’ Up event — the bag! Here’s a picture of Anna with her back pack. This back pack is awesome it has seven pockets inside including a spot for your lap top! It’s really cool and it made taking photos super easy (hands free!).

Of course, we had lots of stamping in opening general session, too. Pam Morgan was our first stamper she did some fun and quick stamping projects.

Here are a couple of pictures from her presentation: 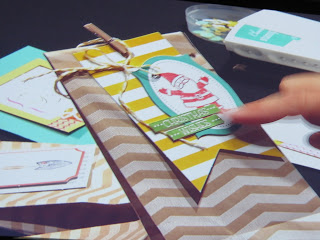 She used the Ronald McDonald House stamp set, Tag It. Aren’t these the cutest bags? I love the new chevron bags in the annual catalog. Especially the bundle with the matching tags accessories kits. And the Tag It stamp set is perfect for tags!

Well, I’ll be back again soon with some more convention stories and photos — it really was a jam-packed three days! 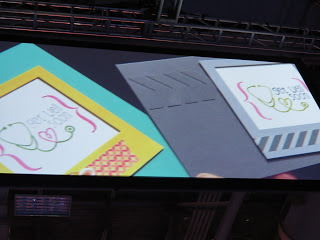