Oh my word. I had such an amazing time in Thailand for the Stampin’ Up incentive trip last week! It was most definitely a trip of a lifetime. I am completely messed up schedule-wise still, though. It is 5AM and I have been up for nearly 3 hours already! Those of you that know me, know that I am NOT an early morning girl, but perhaps this trip is going to change me! I even stayed up later than I’ve managed to do since I got home (a whopping 9PM), but yet, I still woke up five hours later wide awake and ready to get my day started.

Oh well, at least I’m being productive, right? I’ve written two press releases, uploaded all my photos for printing and updated my to-do list all before 5AM!
Anway, I won’t bore you with all the details of my trips (want to sit down and view my 5,000 slides anyone? lol), but I did want to write a little bit about the trip.
First, I just want to say thank YOU. If it weren’t for you and my fabulous Shore Stampers team I would not have had this amazing experience. I probably don’t say this enough, but thank you so, so much for all your support of my little business. And I don’t just say that because I’ve earned a trip because of it (although that is a really great perk!), I honestly am so very grateful for the impact that my customers and stamping family of Shore Stampers have had on me. I said it before, but this company, it’s products and the people it has connected me to has been a life-changer.
Enough of my blubbering… let’s talk about the trip!
The hands-down favorite of the trip was my excursion to the Phuket Elephant Sanctuary (I highly recommend you follow them on Facebook — so fun to see the elephant adventures). It was so amazing to be walking with these creatures and witnessing them “just being elephants.” There are currently four elephants at the sanctuary, all of which were rescued from either the tourism industry or the logging industry. Pioneering ethical elephant tourism, the Phuket Elephant Sanctuary offers a retirement home for sick, injured, and old elephants who have worked an exhausting life. 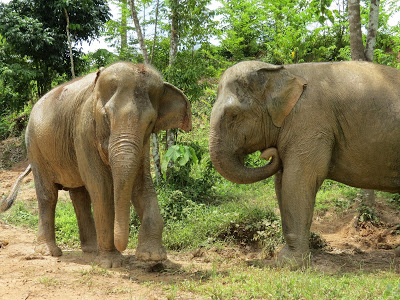 This is Madee on the left and Kannika on the right (I think!). Kannika is the youngest elephant at the sanctuary. She is in her mid-30s. Our guide, Nong, told us that they hope that she will eventually be able to have a baby, but they need to build more elephant shelters to house male elephants.
In the photo above, the two of them were playing in a mud puddle. They got themselves good and covered in mud (which they actually often do as sunblock), but this day immediately after playing in the mud (and they were truly playing, stomping their feet and spraying mud everywhere — in fact I got sprayed with mud at one point!) they went for a swim in the lagoon.
I love this photo right after Kannika (I think!) got in… look at the water around her… it’s filthy! 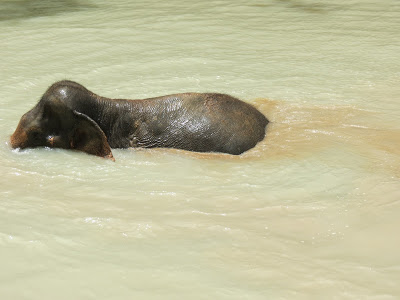 Probably the best part of the day was shortly after this photo was taken. Kannika decided to go up on the hill and knock down some bamboo trees (they eat them because it’s good for their digestion). Well, she was apparently up there too long, because Madee started making a raucous until she came back down. Kannika quickly came “running” down the hill and met her in the water to trumpets and happy squeaks. You can actually see the whole thing in the video I took below. It seriously gave me goosebumps. So, so sweet.
Be sure to have your sound up when you watch. The first noise is strange! I didn’t know what it was at first when I was at the sanctuary, but our lovely guide Nong told us it was Madee telling Kannika to come back. I love that when Kannika comes down she has bamboo leaves on her face (you can see it when I zoom in) and the person talking is our guide. She was so cute!
(Note: The downloaded video is a little blurry… you can view a better version of it on my Facebook page HERE)
And here is a picture of me with the adorable Nong (with all four elephants in the background): 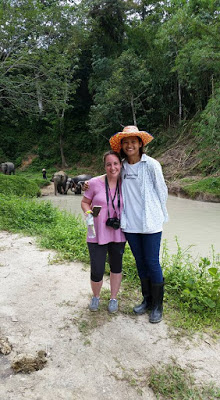 Well, I had planned to talk about other things besides the elephant sanctuary today, but that took me a while! So I won’t bore you with more now. Maybe I’ll add some more posts about Thailand in the coming days/weeks.
Thanks so much for reading through my blabbering… and thanks again for all your support. It truly means the world to me!
Until next time…
Happy Stampin’!
xoxo
Jen
Share This