Deck the Halls every day life Holiday Mini Catalog 2010 Jen Pitta Rag bag purse sewing Stampin' Up Stampin' Up Fabric
September 30, 2010March 8, 2021 jpitta 0 Comments
Hi there blog friends! Interesting title, huh? Well, I have a rather silly story for you today. So, whenever I want to take pictures for the little blog I take my cards outside and stage them on my deck (best lighting ever in the afternoon).
Well, I went out there today forgetting that we had a little “incident” on the deck a few days ago. I woke up one morning and found five piles of poo on the back deck. What the heck? We don’t have dogs. We don’t have cats. We don’t even have fish. So where is this poop coming from — and so much. Overnight. And on the deck?
So we’ve determined it is raccoon doo-doo. I don’t know… did they get “trapped” in the three-sided enclosed deck? Not sure. But anyway, flash forward to today when I’m trying to avoid the little mounds on the deck as I take photos and I think, I should take a picture. Wait, what? Did I just say I’m going to take a picture of poo? Ok… so the scrapbooker in me went a little too far (well, actually I didn’t — because I didn’t actually take the picture — I just thought about it!). Lucky for you, I decided that you have probably seen poop and don’t necessarily care to see it up close and personal and certainly don’t need it for illustration of a story on a little blog. Geesh….
OK… on to some craftyness. In my last post I mentioned that I had sewn! Quite the feat for this non-sewing type girl. But here’s a peek: 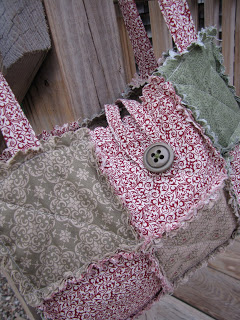 My Mom, being the smart girl that she is, decided we needed proof of this big moment and snapped a picture while I was hard at work: 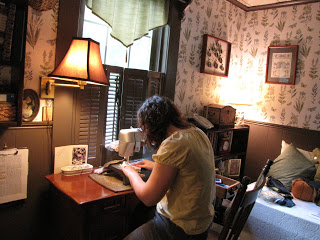 On a side note… that is actually my bedroom from childhood … although it looks NOTHING like it did when I was a kid. Mom transformed it into her sewing room (probably hours after I left! lol)… It is still as cluttered though as it was when both me and my sister (!) lived in that small little room — for 16 years! It’s lucky we both made it out alive. lol.
Anyway, here is the full picture of the finished rag bag purse: 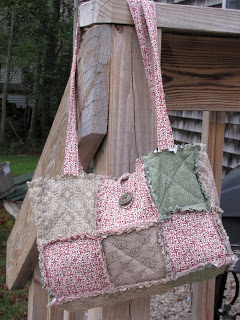 It blends into the deck a little bit, but I think you get the idea. I used the new Deck the Halls Designer Fabric from the Holiday Mini Catalog (and one extra coordinating print Mom had lying around). I’m really so proud of myself — you have to understand that somewhere in my Mom’s attic is a purple scarf still on knitting needles that is probably about four inches long — that was about my attention span for any needle work or sewing!
Well, I took numerous photos today on my poop-ridden deck of some other projects that I’ve been working on … so be sure to check back for some Holiday inspiration soon.
Share This Post: