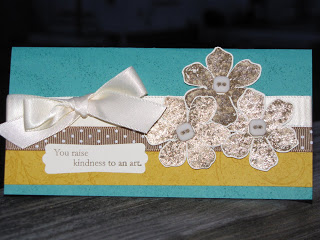 Today, I’m up early again (boy the sun starts to come out at 5 a.m. now!) because I was feeling restless.
Well, actually I initially woke up because darling hubby spilled the glass of water he always has on his nightstand when he went to shut the alarm off. The clinking of the glass on the table, the splashing noise and the following cursing jarred me awake. Lol!
Then I just couldn’t go back to sleep. I was thinking about my niece’s prom, which is tonight. AND the fact that she got her license yesterday! Wow. It feels like just yesterday that she was born and I would spend literally weeks at a time at my sisters house because her husband used to work late and I was still living with my parents and wanted any excuse to get out of the house!
I was texting back and forth with my sister yesterday and I felt so bad because she at one point wrote, “She just left in the car all by herself without me.” And even though I knew she was probably having a difficult time with it, but not really thinking I wrote back saying remember when she was just growling at a little flower (a reference to one of those many nights I spent with her while her husband was working. Heather – my niece – was only about 6 months old and she was growling — and I mean growling — at a little flower that was on my sister’s shirt. It was sooo funny. We even got the video camera out and taped it!).
Well, evidentally after I sent that message my sister broke down and cried. All by herself. (My Mom told me later). What a rotten sister I am, huh?
I honestly can’t believe, though, that she is driving and heading out to her Junior Prom tonight! Amazing. Really. I’ll try and remember to share a photo or two this weekend as I’m planning to go see her off tonight.
Anyway, on to the card. I actually had a make-and-take kit leftover from this 6 X 6 scrapbook page: 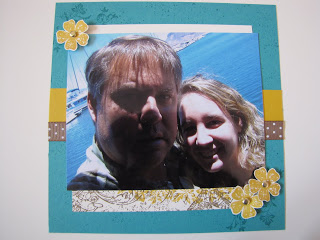 So I challenged myself to make a card out of the leftovers and this (the above card) was what I came up with. I used the fabulous Very Vintage wheel and Vintage Vogue stamp set (both were in the Occasions mini, but will be carried over to the new 2010-2011 Idea Book and catalog!! Yipee!). I love that set.
I aslo used the champagne shimmer paint from the Holiday Mini catalog, which I never got a chance to play with when the catalog was “live.” Those shimmer paints are actually still available though if you would like them. They are A LOT of fun. (Frost White, 116854; Champagne Mist, 116806; Platinum, 116807. They are each $5.95 and go a LONG way… well as long as you don’t dump them on the table like I did… but I digress…)
I actually inked the flowers in Soft Suede ink and then used my sponge dauber to added the Champagne mist to the flower in a couple of spots before I stamped the image. It really looks cool in person.
Well, I’m off to check off my to-do list before seeing my niece off to the Prom later today. Hopefully I’ll have a much more productive day off than last week!
Thanks for stopping by….
Share This Post: